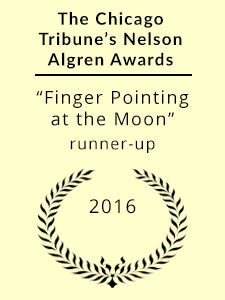 Runner Up, “Finger Pointing at the Moon”

Ain’t nothing I can do to change your mind. I know that now and it don’t matter. Don’t nothing matter but the way George Edd’s dogs moved when they saw him coming out from the house. They smiled and folded themselves in half and spun in a circle. Kidney-beaning, he called it. A normal dog would pant and slobber and kiss you with a sandpaper tongue. But boxers ain’t like that. They make themselves smaller, pressing their heads to their hindquarters, and turn in a circle so you can’t grab hold of them. This means they love you. Maybe, if you can remember that, what I done won’t seem so bad.

My mama’s name is Gene. My daddy’s name was Gene. One is named after a glamorous movie star. The other was just named, period. Names meant more to mama, for obvious reasons, and she took great care when picking ours out. The first boy was called Jonas, after her daddy. She called the second Waylon and the third Willie. I was called Loretta, pronounced low-retta. The school nurse was the only one to say my name without making it sound like something caught in a drain.

Because I was the girl, I didn’t have to work in the yard or go hunting. What I did have to do was cook, clean, sew, mend, dust, iron, polish, scrape, and scrub. I learned to tell everyone’s clothes apart by the way they were ruined. Waylon liked to fish, so his clothes always had dried mud in the pockets from the worms he put there. One time, I found an actual worm, crushed and forgotten, its casing shredded and its greasy pink insides loose like silly string. I left it in, washed and ironed like the piece of ribbon the pastor uses for a bookmark in his Bible.

Daddy’s clothes were full of splinters and shavings that landed in his cuffs and pockets. He worked in the casket factory, carving cedar wood for the fancy coffins with cherubs and spindles and leaves on them. There were small bloodstains on his pants, sometimes, from when he cut himself and didn’t notice. Sometimes I found change in his pockets, which I kept. Other times I found lipsticks and I kept those, too.

My two oldest brothers, Jonas and Waylon, went to work at the casket factory to help take care of us after Daddy died. The casket factory didn’t need two workers, but they took Waylon on anyway because Daddy’s death had been an accident and the casket makers felt bad about it. Jonas had to give up his job with George Edd Hart at the dog farm. Waylon had just finished school, so he didn’t have anything to give up. Willie and I were still in school. Our job was learning who Boo Radley was, or Mama probably would have tried to get us on at the casket factory, too.

The problem was Jonas didn’t want to quit the dog farm. George Edd Hart raised boxers, real pretty ones that made your heart sashay in your chest. They were wild and happy and Jonas said they made him feel wild and happy, too. George Edd had forty dogs on the farm, but he was already on Medicare. He needed Jonas to help with shots, feedings, cleaning out dog pens, and making sure the locks were sturdy.

On his last day of work, Jonas brought me with him. I’d volunteered to help George Edd after school and on weekends and I needed to know where I could find the rakes and hoses and things. It was a Saturday in September, hot like the oven someone might use to cook something as big as a desert. The dogs didn’t like it when it was that hot. They stayed in their shade houses and drank lots of water. We didn’t have that option, so Jonas sweated through his shirt and I piled my hair under a ball cap to keep it off the back of my neck.

“See here, Loretta,” Jonas said. “This part’s important.” He stopped in front of the chain-link cage George Edd kept the eight-week-olds in. Six butterscotch puppies tumbled over each other to bark and claw at the fence wall nearest us. One of them climbed over the top of his brothers and sisters, using them as stepping stones to get closer to Jonas. My brother knelt down and slipped his finger through the chain-link. The puppy nibbled on it. “Don’t fall in love,” Jonas said. “They’re cute little bastards, but they don’t belong to you.”

I watched the sunlight fall on Jonas’s back. It made the center of his blue button shirt look faded, like his spine had seen more wear than the rest of him. “I ain’t in love with nothin’,” I said.

Awarded by: the Chicago Tribune
Awarded in: 2016